This section applies only to users of the VNA1 and (original) miniVNA analyzers. These devices do not show the sign (positive or negative) of the reactance value X. Zplots contains special logic to help overcome this drawback.

This method works for relatively simple configurations of discrete components when connected directly to the analyzer and for simple antennas when measured at the antenna feedpoint. For example, the following figure shows the Z and X values for an 80 meter dipole antenna that is resonant at 3.75 MHz. 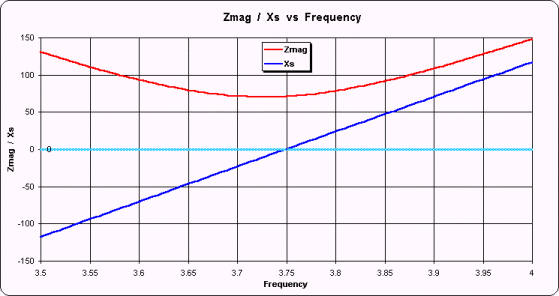 However, if the same antenna were to be measured at the input end of 50 feet of RG-213 (chosen just as an example) the situation is not so clear. (On the following plot note that the scale has changed but the 0 value is still highlighted.) 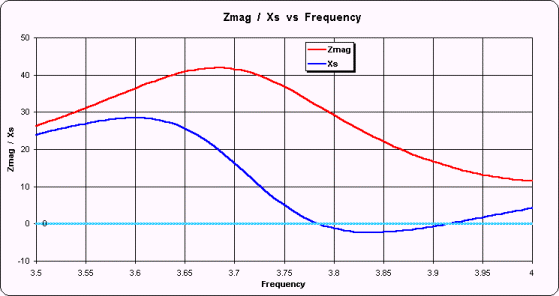 Another technique for resolving the sign of X involves looking at the slope of the reflection coefficient phase angle. This also works in simple cases, but not for this example of taking measurements at the input end of a feedline. 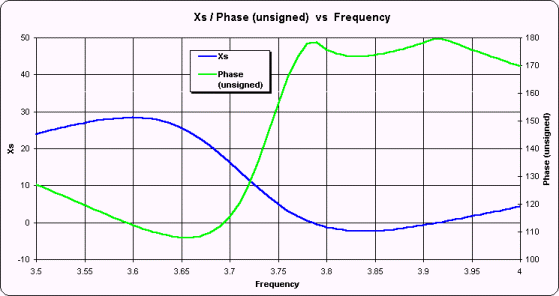 This plot shows X, both positive and negative, referenced to the left scale as before. The green line shows Phase, referenced to the right scale. The Phase values have been artificially altered to be unsigned, the same as would be shown on the VNA1 and miniVNA displays, except for clarity the scale range has been limited to degrees instead of degrees. As you can see, there is no correlation between the slope of the Phase trace line and the sign of X.

Below is a slightly more complicated measurement example, shown on Smith charts instead of XY charts.

For relatively simple cases either method will work. For extremely complex cases, such as measuring a multi-band antenna over a very wide frequency range, neither method may work. If you see "up-down jumps" on the Smith chart, where the sign of X swings rapidly between positive and negative values, it means that the sign of X was not determined correctly. It is amazingly easy for the human eye to see these shifts, and surprising difficult for a "blind" computer program to do the same.

You will see the three option buttons only when the input data to Zplots comes from either the VNA1 or miniVNA analyzer. If you choose one of the correction algorithms the corrected sign will also be shown on the various traces of the Custom XY chart that are dependent on the correct sign of the reflection coefficient angle, including Xs, Theta, Phase, and others.