A very common scenario is the need to make accurate antenna measurements with the antenna system in its operating position, perhaps atop a tower, while the measuring equipment is on the ground. In this situation there is a trade-off between convenience and accuracy. The following techniques may be employed, listed in the order of most accurate to least accurate.

Perhaps you have a section of the same line that was left over from your antenna installation. If so, you can use the Zplots "Measure Transmission Line Parameters" feature (described on the main Zplots web page) to determine the electrical characteristics of the line: nominal Zo, nominal VF, and loss coefficients K0/K1/K2. Then the only additional piece of information needed is the physical length of the actual antenna feedline.

If you can terminate the line with either a short or open (one or the other), you can determine the length by using either a) the "unwrap Smith chart" technique (most accurate) or b) the "quarter-wave or half-wave points" technique (less accurate). Both of these methods are described in more detail below. To provide an open circuit termination you can just unscrew the feedline connector at the antenna. If the connector is wrapped in several layers of or if the feedline is directly attached to the antenna such as with coax pigtails soldered to either side of a dipole, just place a jumper across the antenna feedpoint to provide a short circuit termination. Make the jumper as short as possible.

With the electrical characteristics and the physical length in hand, reconnect the far end of the line to the antenna (or remove the jumper) and run a sweep over the frequency range of interest. Load the sweep data into Zplots and then use the "Subtract Transmission Line" feature (described on the main Zplots web page) to "subtract out" the effect of the feedline.

So it all boils down to how much accuracy you want versus how many different ways (if any) you can terminate the far end of the line. If you can place OSL terminations at the far end just calibrate out the line. That will take full advantage of the error correction algorithms that are part of your instrument's control software. If you can only place an open or short you can determine the length using one of the techniques described below and then use the Zplots "Subtract Transmission Line" feature with electrical characteristics that are either actual (via measurements of a piece of identical line) or estimated (via one of the built-in line types). And if you have no access to the far end of the line you can use TDR techniques to determine the length, although probably not with as much accuracy as with an open or short termination.

Here's an example of using Zplots to determine the length of a transmission line. In this case an unknown length (estimated to be between 50 and 100 feet) of Belden was terminated with an open circuit. A frequency sweep from 1 to 2 MHz with a 0.05 MHz step size was made and the data file was loaded into Zplots.

In the example above all the dots ended up on top of one another. But this was a theoretical case shown just to illustrate what it means to "unwrap" a Smith chart. Using "real world" data the situation won't be quite so simple.

In this particular case I had determined the electrical characteristics of an identical section of line beforehand using the Zplots "Measure Transmission Line Parameters" feature. The values for nominal Zo, nominal VF, and loss coefficients K0/K1/K2 were automatically transferred to the "User Specified" line type and I continued to use those values, changing just the line length.

Note: If you change the K1/K2 coefficients be sure to make a note of the new values. That way you can use the same values when you re-attach the line to the antenna, make measurements with the antenna in place, and then again "subtract" the correct amount of line in order to see just the response of the antenna itself. When you make changes to any of the characteristics for the built-in line types those changes are not saved once you close the dialog panel. On the other hand, any changes you make to the characteristics for the "User Specified" line are saved and will be shown the next time you use the dialog.

Also note that it is not necessary to use a large number of points (small step size) when determining the length of a line. Just run a sweep over the frequency range of interest and use enough points, perhaps a few dozen to a hundred or so, to make the "subtraction" steps clear. Using fewer points means that Excel will be able to update the Smith chart faster, something you'll notice when using the "Up/Dn & Apply" spin buttons.

Finally, remember that you could have terminated the line with a short circuit instead of an open circuit. In that case, adjust the "subtracted" length until the trace collapses to the 9:00 o'clock (left side) point on the outer circle of the Smith chart, the short circuit position. 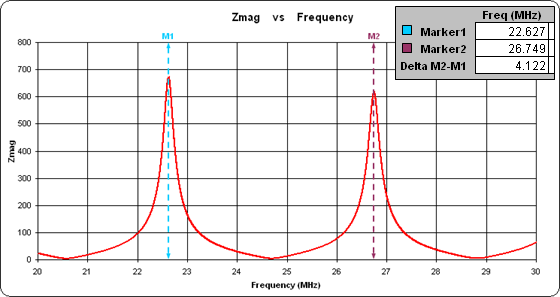 Here's an example for a section of Belden terminated with a short circuit and swept over a range from 20 to 30 MHz. By placing Marker 1 on the first Zmag peak and Marker 2 on the next peak, the marker table will show the frequency difference between the two points. That frequency difference corresponds to a half wavelength. Together with the speed of light and the velocity factor that's all you need to determine what the physical length of the line must be.

The problem is that the velocity factor changes with frequency, as the above chart shows for three different types of coax all having a "nominal" VF of 0.66. For all three the VF approaches 0.66 at very high frequencies. At lower frequencies the amount of change in velocity factor is dependent on the internal inductance of the cable conductors (center conductor and outer shield). The internal inductance is related to the resistance of the conductors. And the resistance of the conductors is related to the loss of the cable. The greater the cable loss (that is, the higher the attenuation in dB/100 ft) the more the VF will change at lower frequencies.

This problem does not apply to the "unwrap" Smith chart technique for determining line length. In that case the Zplots algorithm uses the loss coefficients K0/K1/K2 to automatically recalculate the correct VF value for each separate frequency. (Actually the math is a lot more complicated than that but the effect is the same.)

Suppose you can't access the far end of the line at all, hence you can't terminate the line with an open or short circuit and use one of the methods discussed above to determine the line length. Using the DG8SAQ VNWA software you have another option for determining the length of a transmission line even when the far end is connected to an antenna. You can take advantage of the VNWA time domain reflectometry (TDR) feature.

Why does this work? For most antennas the feedpoint impedance (that is, the impedance at the far end of the transmission line) will be close to the characteristic impedance of the line only over a relatively narrow frequency range. Or in the case of a multi-band antenna it might be a multiple number of frequency ranges. But if the input end of the line is swept over a very wide frequency range, say from close to DC to a few hundred or better yet a few thousand MHz, at the great majority of those frequencies the terminating impedance will be far removed from the line's Zo. Hence for most of the spectrum the reflection coefficient will be closer to 1 than to 0. (If the line were terminated in an open or short circuit the reflection coefficient would be exactly 1 at all frequencies.) A reflection coefficient close to 1 means that a large part of the energy that is fed into the line will be bounced back at almost all frequencies. When the wide frequency spectrum is converted to the time domain via an Inverse Fourier Transform the response will look like a pulse bounced back from a point on the line where there is a large impedance mismatch; namely, where the line connects to the antenna.

For example, below is what the reflection coefficient magnitude (rho) might look like at the antenna feedpoint for a typical tri-band meter) Yagi. The frequency sweep is from 1 KHz to 160 MHz. A reference line at rho value 0.333, which corresponds to an SWR of 2:1, has been added. The 20 meter, 15 meter, and 10 meter bands have been marked. You can see that although the reflection coefficient magnitude exhibits a very complicated pattern, at most frequencies the value is relatively high. Hence at most frequencies most of the incident pulse energy will be bounced back.

Note that the amplitude of the returned pulse won't be the same as if the line were terminated in an open or short. In addition to that portion of the pulse energy that is dissipated due to the attenuation of the line, part will be absorbed by the antenna itself. But in this case we don't care about the amplitude; we can use other means (such as measuring a section of identical line and/or using one of the Zplots built-in line types) to get the loss characteristics of the line. All we want is the time delay of the returned pulse which can be converted into a distance.

Now rather than stopping at 160 MHz suppose you widen the frequency span, say up to 1400 MHz. And further suppose you run the sweep at the input end of the transmission line. (Remember, you can't access the far end.) You know that the line is with a nominal velocity factor of 0.66 and you estimate the length to be somewhere between 50 and 100 feet. A few mouse clicks with the VNWA program would show something like this, indicating that the line is approximately 24 meters long. 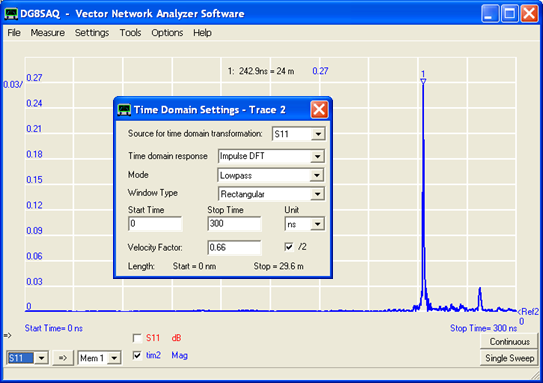 In more detail, use these steps to produce a plot like the one above:

Note: The VNWA software can also be used with the N2PK VNA hardware. And you can use the VNWA software by itself even if you don't have either of the supported hardware devices. In that case, use whatever instrument you do have to run a sweep over the maximum frequency range with a step size that results in no more than 8192 points. Save the sweep data in Touchstone s1p format. (If your control software does not have the capability to produce s1p files you can always load the data into Zplots and then use the "Save as S1P" button.) Then with the VNWA program use File > Import Data > s1p > to S11. 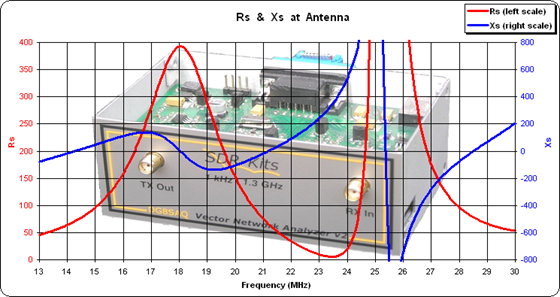 Thanks are due to Tom Holmes, N8ZM for describing this technique in a message board posting. And of course thanks also to Tom Baier, DG8SAQ for making the VNWA software available for use even if the hardware is not available. For more information on the VNWA TDR function see the "Time Domain Measurements" section of the VNWA Help File. For a good overview discussion of TDR techniques see the "Time Domain Analysis Using a Network Analyzer" Agilent Application Note 1287-12 and Techniques for Precise Time Domain Measurements in the Field.

Photo by SDR-Kits used with permission.